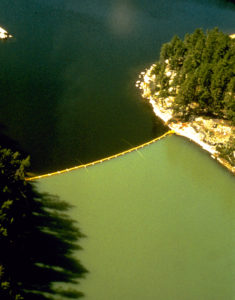 The Experimental Lakes Area (ELA), a research station east of Kenora, Ontario, recently celebrated its 50th year of monitoring and manipulating lakes—50 years during which scientific and government focus has changed enough to imperil the research station and open exciting new directions.

The field station is deliberately isolated from human activity, at the end of an unpaved road off the Trans Canada Highway. It has been protected by special legislation since 1968, when the need to investigate pressing freshwater issues prompted the Fisheries Research Board to establish the research station. The legislation reserved 58 small lakes and their watersheds for the study of human impacts on freshwater. Fundamental to the ELA mandate has been finding solutions to anthropogenic impacts, and informing policy, such as the landmark work on algal blooms that illustrated the effects of phosphates in detergents in the 1960s and 1970s.

Dr. Michael Paterson has worked at the ELA for more than 20 years, and served as the section leader (or chief scientist) from 2004 to 2010 and 2014 to 2017. As he says, “The thing that’s unique about the ELA is that we apply experimental methods at the environmental scale, and it is at the environmental scale that we as a society primarily interact. And that’s where the problems arise.”

He elaborates further: “The Great Lakes have been impacted by nutrients, new species, fishing pressure, contaminants, and climate change. All of these things are happening simultaneously so it makes it very hard to partition the effects of all of these various insults that are occurring to the lakes. What we can do at the ELA is manipulate one factor at a time in a care- fully controlled fashion, following what happened to the lake before and after the manipulation. We also have the ability to compare what’s going on in our manipulated lakes with a set of unmanipulated lakes, analogous to controls in a laboratory experiment. So, we have a comparison to see what kind of natural variation in lakes might also occur in these lakes.”

This approach has led to a body of work that has been cited in more than 1,000 peer-reviewed publications, covering topics from cattail bio-platforms to climate change and mercury contamination. The longest running experiment has been in progress for almost 50 years and relates to the addition of nutrients to and subsequent eutrophication of Lake 227. 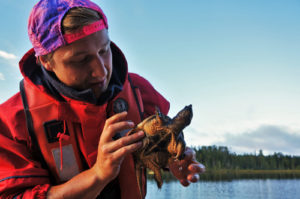 The longevity of the ELA has also proved to be valuable in some unexpected ways as climate change becomes a more important area of research. For limnologist and ELA research scientist Scott Higgins, five reference lakes have provided opportunities to look back at the history of climate change. Higgins notes: “We talk about climate change like it is something that is going on in the future, but the climate has been changing since human industrialization. If we look back over the last 50 years of data from the reference lakes, we can ask how climate change has happened without the impact of other stressors like fishing pressure or impact from cities or development. As the data sets get longer, they get to be really valuable. There are a few other places in the world where you get these really long data sets, but typically not with data this comprehensive.”

As just one example, Higgins points to a meteorological station at the ELA that has been jointly operating with Environment Canada since 1968. “We’ve got data on hydrology, how much water is flowing over land, and the chemistry of that water. We can start to ask and answer some really good questions about climate change.”

In 2012, the Harper government announced its intention to stop funding the ELA. This move proved to be wildly unpopular with the Canadian public, the international scientific community, and non-profit organizations. Negotiations between provincial governments resulted in a joint solution, with ownership shared between the Ontario government and the Winnipeg-based non-profit International Institute for Sustainable Development (IISD). According to Dr. Paterson, the transfer to the IISD has come with a broader mandate to do science in the public interest, beyond fish and lakes to terrestrial ecology and new research into oil spill remediation. “Ultimately, lakes are a reflection of every- thing that happens around them. Lakes are really just holes in the ground that collect water, and all of that water is very strongly affected by any of the activities that happen on the land,” says Dr. Paterson. “One of the things that I have looked forward to working on now that we are a part of IISD is to try to get more terrestrial ecologists involved, so we can link what we are doing right now to the surrounding land,” Dr. Paterson notes.

The land around the ELA is significant as it consists of boreal forest, the world’s largest intact forest and an important global carbon sink. As Scott Higgins describes it, the black spruce and pine burn on an approximately 100-year cycle, sending their carbon back into the atmosphere. However, the carbon in the sediment of the wetlands, lakes, and peat bogs is stored for long periods of time under water, potentially dating back to the last ice age. This makes the ELA a particularly valuable and potent data point in global climate change research.

“We get a lot of data requests every year from external organizations asking for our data to answer questions about global change. And then we become one site of many sites around the world. It makes our site even more valuable that we aren’t just collecting data for ourselves and our research questions; we freely provide the data to anyone who asks for it,” says Higgins.

According to Dr. Paterson, there are unique challenges when working on an ecosystem scale: “Ecosystems are complicated things, and our understanding of ecosystem responses is still very imperfect. I think part of the problem comes from the fact that historically not that many people have looked at ecosystem responses. We tend to have a lot of specialists that have looked at isolated slices and we have lacked the tools to integrate all the parts to come up with effective predictions. I definitely believe that the accumulation of data and the development of more synthetic tools for putting that data together and understanding it will lead to improvements in policy and best practices.” 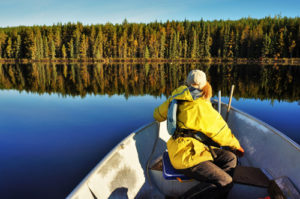